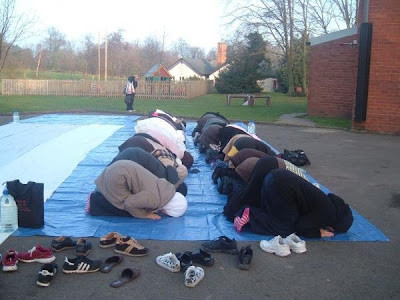 ~tribute to all kaum hawaku sayang =)
Posted by Raehan at 2:34 AM No comments: 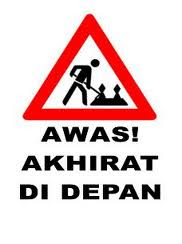 In the name of Allah, The Most Gracious and Most Merciful.

Alhamdulillah. All praised and thanks to Allah S.W.T, whom with His willing and guidance that always with me as well as strengthens me a lot for giving me the opportunity to further my life with the most precious of Iman and Islam.
I would like to share something that mostly all the Muslim know about this. Are we willing to meet at that time??LIFE IN THE GRAVE!. Firstly, hope this entry will give the message to all people. =)

According to hadith of Tirmizi: The Prophet Muhammad S.A.W was reported to have said that: “the grave is either one of the gardens of Paradise or one of the pits of Hell”. Here, we believe that, all those things will happen according our deed. In Islam, death is the end of this life and there is no returning to this life in any form like ‘karma’ which, the Hinduism believes.

Life does not end at death. Remember! Belief in life after death is a basic principle of Islam. According the Noble Qur’an says, “Then Allah causes him to die and assigns to him a grave, then Allah Wills, raise him to Life again”, [`Abasa:21-22].

Muslim believes that, everyone will be raised from the grave on the Day of Judgment (Hari Kiamat), whether he or she was buried or not. For example, the body was destroyed in a fire or flood. They will be in the earth at its place of death.

Actually, life in the grave is a place of transition or waiting. It is also known as barzakh. Barzakh means, ‘a barrier between two things’. This means, barzakh is a barrier between the worlds of the dead and their Resurrection on the Day of Judgment (Hari Kiamat).
In the Noble Qur`an says, “And the agony of death comes with the truth. That is what (the disbeliever and evildoers) use to flee from!” [Qaaf: 19].

Remember, all the material things, status, family, relatives and friends are removed at death. Thus, the first request of the disbeliever at death is to be returned to their former life. They were regret! In the Noble Qur`an said, “O Lord, send me back so that I may do good deeds in the world that I have left behind” [Al-Mu`Minun: 99-100]. But it’s too late; this request will not be granted. There will be no more opportunity to life back or to do good deeds. The door for repentance is permanently closed! MasyaAllah...

For the good Muslim, their souls of the righteous ones experience gentle, good condition, quick, satisfied exit and will be taken to heavens. In the Noble Qur`an said, “their name will be recorded in the Register of Paradise (Illiyin) before they are returned to their graves [Al-Mutffifin; 18]

While, for the disbeliever, they will realize at death about the Punishment in the fire (Hell) that awaits them. They will struggle for their souls and bodies. They will be in a great pain until all their bodies destroyed, their bodies will be renewed. Subhanallah, I’m fear to Lord of Allah. His punishment is true and very great disaster.

The prophet Muhammad S.A.W was said that, if human beings could hear their cries at death, they would FAINT!. MashaAllah...Their names will be recorded in the Register of Hell (Sijjin). [Al-Mutaffifin: 7-8]

Remember, life in the grave will begins with by two Angels, Munkar and Nakir. The dead will be asked about the God (Lord, religion, Messenger, their deed and ummah (brothers and sisters).
The good souls will answer with ease and they will be rewarded with spacious graves. Their graves become huge and bright. Their good deeds will become personified and be pleasant company for them in their graves. They will enjoy their Paradise life in their graves. They will beg to Allah to bring the Day of Judgment as soon as possible, so that they can enter the Paradise and dwell there permanently.

But the disbeliever, their souls will not able to answer the questions asked by two Angels, Munkar and Nakir. According to hadith of Bukhari and Muslim, they will be hit so hard with an iron hammer that everything near them (except jinn and human beings) will hear their screams. They will live in dark and narrow graves. Their bodies will be so tightly pressed from grave that one side of their ribs will crash into another. MashaAllah….They will be in great pain.

From hadith of Bukhari, the Prophet Muhammad S.A.W narrated the agony of one whose mouse was torn right up to the back of his head.Subhanallah…the punishment is a continous. The Noble Qur`an mentions as an example the evil Pharaohs (Firaun). They will be brought tonthe Fire (Hell) “morning and evening”. [Ghafir: 46] before they are thrown into Fire (Hell) on Day of Judgment (Hari Kiamat) for more severe punishment.

The disbeliever, will beg to Allah, not to established the Day of Judgment so that, they can be spared the permanent Punishment in the Fire (Hell). Allah the Almighty says that, the Day of Judgment is “sure to come when every soul will be given what it has earned and there shall be no injustice” [Ali-Imran:25]
Allah, the Most Merciful says: O believer! “Turn to Allah in true, sincere repentance”. [At-Tahrim: 8] 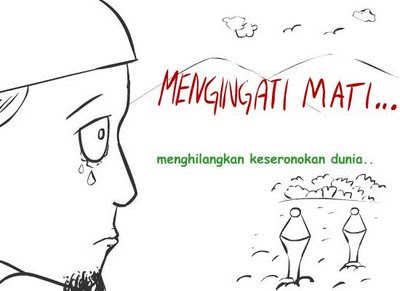 To all people, let us seek Allah’s forgiveness and Mercy before death overtakes us. DEATH IS TRUE!! May Allah the Most Merciful spare us from the Punishment of the grave and Day of Judgment.. Ameen Ya Robbal Alamin.

All the hadith and translation of al-quran were taken from PERKIM.
( www.perkim.net.my)
Posted by Raehan at 6:47 AM No comments:

Allah is my love